Before entertainment in a square box became largely associated with the television there were quite a few other associations.  Who could forget the memorable exploits of Punch and Judy in European settings?  In some lands box like stages were used to portray all kinds of puppet shows, even if the puppets were no more than shadows.  In the furthest parts of East Asia there was a thing called Kamishibai, which were used to entertain and educate the very young.  Kamishibai has a very rich and interesting history.  From it stem many forms of entertainment and unlike in previous times it’s now accessible by computer instead of by a select few skilled craftsmen.  So it’s really quite easy to get enmeshed in the world of Kamishibai whether you’re old or young.

Since Kamishibai is so very obscure this report must serve to educate the general populace on this rare and exciting art form.  Hopefully the young, old, and everyone in-between regardless of educational status can read this document.

To make sure people become fully aware that there is a Kamishibai community.  Since Kamishibai can function as a hobby and a tool when teaching kids it should be more widely known.  It is the predecessor of the widely loved manga craze, but rarely received credit for coming first.  I also hope to rectify that oversight.

The divisions within this paper shall include many topics.  One topic shall be the History told in the sub divisions of Pre Depression Japan, Post Depression Japan, and American Kamishibai and Resurgence. Then I will go into the nature of Kamishibai itself and also talk a little about some of it’s more it’s effects on the media format known as “manga”.

A lot of my Methodology will be utilizing Internet website sources in order to get the information that I need.  It isn’t really possible to use literature because most books only mention Kamishibai with passive fervor.  It may receive a sentence or two at the most.  Also my personal experiences with the current Kamishibai Internet Society will fill a lot that information in.  So both Primary Research and Secondary research will be put to use.

Although most people believe the history of Kamishibai lies at the onset of the Japanese Depression it does not.  It is in fact an art medium stretching back centuries before that.

Kamishibai can be traced back to the 12th century when purportedly Buddhist monks used it in their temples.  Although believed to be brought to Japan from China this rumor is largely unproven.  It is known however that the Buddhist monks used this form of story telling to talk about the history of their temples and deities (Japan Society). It is also known that throughout Japan’s history, much like throughout the world, shadow puppets on a stage were used to tell various tales (Japan Society).  During Japan’s Heian Period, roughly the 11th to 12th centuries, one predecessor of Kamishibai was “Emaki”(Hirofumi). Emaki means “Scroll Picture” and was viewed mainly by nobility as a sort of movie on a single scroll being pulled across a screen (Hirofumi). The most famous of these Emaki is “Genji Monogatari Emaki” which was the visual adaptation of the 11th century novel Genji Monogatari (Motoyama). But as with many mediums this form of folk story telling fizzled out and became one of Japan’s many obscure art forms.  That is, until it regained staggering popularity in the 20th Century, which is eight full centuries later.

On October 24, 1929, also known as “Black Thursday”, the stock market crashed.  This crash was not simply felt in the United States.  It in fact had a ripple effect that branched out to countries all over the world.  In Asia many industries depended on Western trades in rubber and tin (Wikipedia).  With the high tariffs installed by America to make up for profits countries like Japan could not export their goods readily or easily.  Of course this resulted in many Asian countries, including Japan, falling in a Deep Economic Depression.  It was during this period, The Showa Era in Japan, that Kamishibai showed a dramatic resurgence.  It is estimated that at least 25,000 Kamishibai storytellers were in existence during period (Sheppard).  It is speculated that there may have been at least 3,000 in the city of Tokyo alone (Japan Society).   The “Gaito Kamishibaiya” or Kamishibai Storyteller would ride his bicycle to an area or neighborhood with a stage hooked onto the back so that he could tell his story to children of that neighborhood as shown in figures 1 and 2. 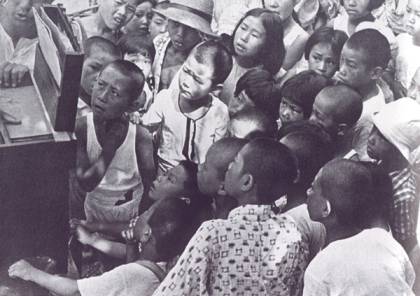 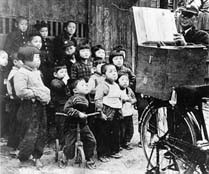 Figure 2. Another Vintage Photo of a Kamishibai Performance

However with the invention of the Television in 1953 children simply stopped coming out to see their favorite Kamishibai stories being performed.  Even though the Kamishibai performers started to add lights and loudspeakers to their stages they were sadly phased out with power of the boob tube (Gorden).  So as time went on Kamishibai performers faded from the streets of Japan. 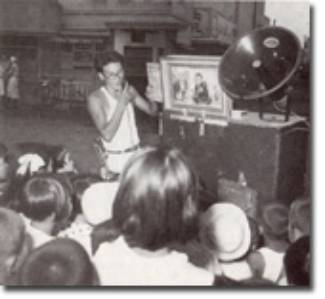 Although no one knows for sure when public interest began to rise again, it is speculated that around the mid 1980’s Japan started to get a renewed interest in it’s older art forms.  This of course brought about a kind of renaissance for the Kamishibai medium and it began to appear in schools, libraries, and culture centers (Eisenstadt).   In the late 1990’s Kamishibai was not only brought to America, but also saw stardom on the Internet.  A company that goes by the name of “Accursed Toys” made the first Kamishibai program for Microsoft Windows that allowed not only the stories and pictures to be viewed, but also gave the creator the option of adding music and sounds to their tales.  Also in America you find Kamishibai in classrooms with young children.  Mostly used as a sort of cultural exchange activity in classrooms it is said to be very enlightening for young minds. Mary Tigner-Rasanen states:

“I first used kamishibai in the classroom this year. I work with 7th and 8th grade at-risk readers. When we began our folk tale unit, I told a story using the kamishibai cards. As I began, a hush fell over the room of normally rambunctious kids. They listened with total attention and applauded when the story was finished! Later, groups of students had the opportunity to use the kamishibai to tell the stories to the class. They were able to do this very well using the cards. Although they rehearsed the story, the fact that it was printed on the backs of the cards meant that they wouldn't forget their lines. In addition, having the "prop" of the cards diminished their anxiety about speaking in front of their classmates, and also helped focus the attention of the listeners. The discussions of the stories were lively and prompted the students to think about things in new ways. “(Eisenstadt)

Although Kamishibai is mainly available professionally at carnivals, ceremonies, and festivals (Such as the Cherry Blossom Festival during certain years) you can still find pockets of people who create and make them as a sort of hobby.

The Nature of Kamishibai

Kamishibai specifically means “Paper Drama” and it’s most current state can be traced back to the early 20th century “Gaito Kamishibaiya” (Kamishibai Story tellers).  To go into detail about what those storytellers did is simple. The storyteller, as you heard, rode a bike with a stage mounted on the back to a certain area like a park or neighborhood.  The stage would be equipped with 2-3 stories for that days telling.  Once in the area the Kamishibai performer didn’t make his money from actual storytelling, he made it from selling candy to the children who came to see his show.  The children who bought the most candy were the children who got to sit up front to see the story.  So of course you can wager that the kids tried their best to get the best seats for viewing the tales told.  The Storyteller announced his presence by clapping two wooden blocks together called “hyoshigi” (Wikipedia).  Sometimes even one of the lucky children would get a chance to clap them together (Eisenstadt).

Once everyone was assembled the performer would begin telling the story by using the illustrated cards depicting each scene on the stage.  Each card not only showed a scene from the stories but also had the text written on the back, just in case the performer got lost along the way.  He of course would do each story in “serials” or installments and continue it the next day to keep his customers coming back. Much like how our TV shows have episodes “to be continued” or our comics do much the same thing.  One of Japan’s most legendary superheroes got his start in Kamishibai and he was the “Ogon Bat” or “Golden Bat” (Watanabe).

“The Golden Bat” and Kamishibai’s effect on manga

When Kamishibai dwindled into the annals of the human mind it seemed as if the classic superhero “The Ogun Bat” would do the same.  During the Kamishibai heyday this story serial was probably the most highly requested story and adored by audiences.  The series was mainly about a superhero named Golden Bat who stood for truth and justice and resembled a sort of phantom of the Opera persona.

He was called upon by a young girl who went by the name of Marie/Mary and usually bailed her out of assorted bad situations involving thugs and scoundrels (Kaya). Originally the series was made by the scriptwriter Ichiro Suzuki and illustrator Takeo Nagamatsu (Court). At that time Ichiro was twenty-five and Takeo was merely 16 years old (Japan Society)! After the war ended and Kamishibai interest waned a new writer, Kouji Kata, came to be in charge of Ogun bat as it made the great leap from Kamishibai to graphic novel.  Later it made the leap from manga or a Japanese graphic novel to an animated series.  This formula strangely became a norm for many series.  Not all of them originated from Kamishibai of course but many early manga comic illustrators and writers attest that they learned what they learned by watching and listening to how the Kamishibai storytellers worked.  It’s not hard to see because as someone who has worked in comics it is easy to agree that watching someone work a story panel by panel is really an excellent form of comic book training.

Even though Kamishibai has had periods of popularity and obscurity one must admit that it is indeed an interesting topic.  The delicate mixture of intimate storytelling and personalized artwork can have a profound impact on people.  The history of Kamishibai shows us so very much about how some things never really run out of style.  They just have the need to be renovated and marginally improved.  Also as with many things that give birth to media crazes the originals are often forgotten and left to gather dust and darkness.  However this does not seem to be the fate of the plucky Kamishibai artform which shall hopefully enjoy many more eras of popularity and reverence.

Motoyama, Kiyofuma. "A study on the visual communication in the Electronically Networked Society

Heian Period – A highly idealized period in Japan marked by peace and prosperity. Also saw the rise and influence of the Samurai class. This period would give way to the Japanese feudal era.

Hyoshigi – The clappers used by Kamishibai storytellers to announce their presence in an area.

Manga – The name for Japanese comics.  Usually considered closer to a graphic novel because more than one issue is featured in each volume

Showa Period – From 1926 to 1989.  The longest period of any Emperor, and also marked as a time of Imperialism.